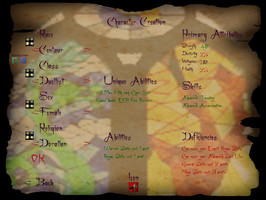 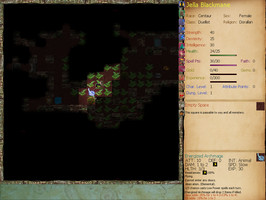 This is a quick update, but there were a couple of critical things I wanted to address, so enjoy!  If you've previously downloaded ver. 0.76.65 or 0.76.66, the new patch download will get your game right up to snuff.  Just download the zip file, place it in your main Caverns of Xaskazien 2 folder, unzip it, and answer yes to any "do you wish to overwrite" previous files questions.  Then go kill an arch-daemon.

- Added alterable Combat State, via button or key press, to allow you to deliberately NOT attack monsters you don’t wish to kill (for religious purposes or otherwise).

- Added Selective Combat tab to allow you to automate which types of monsters you would prefer not to attack (if any) and had it default to settings useful to player religion at start of game.

- Placed maximum allowable bets on Wheels of Fortune to make Gambling Skill less game breaking.  That max is based on Dungeon Level.

- Added clickable button to centre screen on your character, for those wishing to solely use the mouse, as opposed to keyboard and mouse.

- Improved ancient AI for Thieves and other such monsters that pick up treasure from the dungeon, by allowing them to target any treasure they can see, prioritizing the closest, rather than only being able to go for treasure directly adjacent to them.

- Fixed errors sometimes messing up how much a monster’s DAM rating should be lowered by a Wither spell.

- Fixed multiple text output errors that could occur when drinking Asterian Moonshine from a Liquor Barrel.

- Fixed outdated and misleading information regarding the likes and dislikes of certain Major Deities if querying them from the Stats Tab.

- Fixed error allowing you to gain rewards for killing monsters, even if you were killed in the same round of combat, sometimes having the effect of raising you from the dead (for instance, if you had at least Advanced Necromancy and died while simultaneously killing an Undead monster).

- Fixed error causing the bottom half of the Religion Tab button to ignore being clicked.

- Fixed error not properly loading in graphic for Gold Pan.

- Fixed error informing you that an angry Pantos had taken -20 Faith (instead of 20 Faith).

- Fixed errors not mentioning in queries of Dallerithian Medallion or Medallion of Demon Contact that their usage will anger Good gods.

- Fixed error where Thieves, Bandits and Outlaws weren’t picking up Silver they found in the dungeon.

Get Caverns of Xaskazien II

A graphics intensive roguelike. Explore the caves, kill the demon, save one small pocket of the multiverse.

Also, please note, both the readme file and the game manual have been updated to fully explain the new Combat State button and Selective Combat Tab.

AND, thank you to Someone64 for the ideas for both of the above!